Keto Bacalhau à Brás is an amazing healthy version of the traditional cod fish recipe. And what is awesome – it tastes almost the same as the original one with potato chips.

For those who don’t know what Bacalhau is, read a short intro about this popular Portuguese food.

Bacalhau is the Portuguese word for cod fish and it is of one of the most traditional meals in Portugal.  And Bacalhau à Brás is a typical Portuguese recipe.

Bacalhau is a staple in Portuguese cuisine with what’s believed to be nearly 1,000 ways to serve it.

The popularity among the Portuguese dates back to before the Age of Discoveries (15th-18th centuries), when Portuguese sailors traveled the world, sometimes spending months abroad relying on fish as a food source.

The beginning of consumption of Bacalhau in Portugal may have started as an inexpensive substitute for people during holidays and other religious events.

You’ll find the cod salted and dried in the stores everywhere. Salting and drying the fish helps maintain its shelf life for a longer period. The term Bacalhau always refers to dried and salted cod, while fresh cod is called Bacalhau fresco.

Traditional recipe of Bacalhau à Brás is made of shredded cod fish, eggs and straw potato chips which can be bought in the stores ready made. It is usually topped with olives and parsley.

But as I always like to transform traditional recipes to healthier version, I would love to share with you low carb or keto Bacalhau à Brás.

Everything except the potato chips is really low carb. So it is super easy to substitute this recipe with keto version. How?

With the celery root! And you know what? It tastes almost just the same as the traditional Bacalhau à Brás. At least my husband says so 🙂

Place them on the parchment paper, add 1 tbsp ghee butter and add it to the preheated oven and bake under 200 degrees Celsius for about 20 minutes or until they turn brown and crispy. Time to time mix them so they don’t burn.

For those who are not familiar with cooking salted cod, it’s important you get rid of the salt before cooking it. So make sure that you leave the bacalhau in the water for 2 days in the fridge to get rid of most of the salt.

3. On the frying pan, add 1 tbsp of ghee butter, diced onion and garlic, fry for a 2-3 minutes and add the shredded bacalhau. Cook together under mild temperature for about 5 minutes.

4. Then you can add the baked celery chips, mix well, fry for about 1-2 minutes. Then scramble all 5 eggs and add it to the mixture. Mix well, switch off the heat. Add the parsley and mix well.

5. Serve on the plates, garnish with parsley and olives. Eat while it’s still hot. 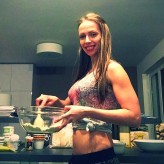